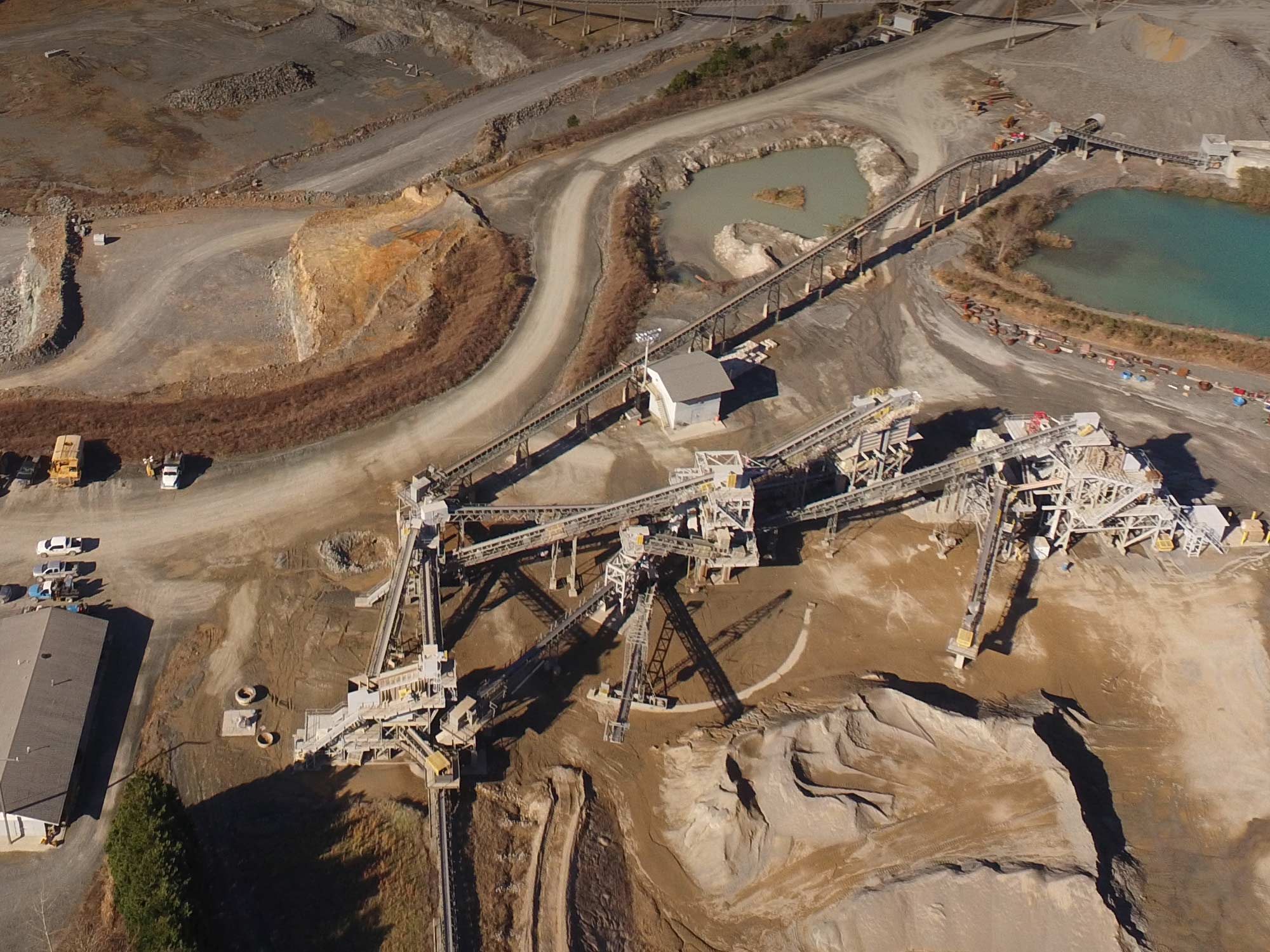 When CP&L decided in the early 1970’s to build the Shearon Harris Nuclear Power plant in Wake County, it opened the door for future growth by Wake Stone.

With the availability of a site in Moncure near the Shearon Harris plant, Wake Stone negotiated a contract in 1973 with the util­ity to provide stone for the project. The contract was a major accomplishment for the company and represented one of the first significant steps in Wake Stone’s growth.

Johnny Bratton became the quarry’s superintendent and with a small crew developed the pit, erected a crushing plant, and opened for business in 1975. With CP&L’s requirements for stone, sales grew steadily. The nature of the CP&L project made quality control even more critical than usual, and it presented a challenge for the young quarry.

In 1978, after graduating from the University of North Carolina at Chapel Hill, Ted Bratton joined the Moncure crew as pit foreman. He had worked summers and part-time since 1970 and knew much about the business. Later, he was promoted to superintendent.

In 1981 CP&L decided to scale back the construction of the Shearon Harris plant from four reactors to one. Without this major customer, the quarry could no longer operate profitably.

In 1983, after building a stockpile to meet the final needs of the utility, the crew packed up and moved themselves and almost all of the equipment to Cary to open the Triangle Quarry.

In 1987 former Sales Vice President John Poole completed a market study of the Moncure area including Jordan Lake. He concluded that, with good marketing, the quarry should be able to support itself. Wake Stone reopened the quarry in August 1988. The quarry’s sales during the next year met Poole’s projec­tions, and sales have been steady since that time.  As the Triangle area grows, much of it is heading south.  Sales in Moncure are expected to get close to one million tons per year in the near future.

Plant expansion began in early 1995 in preparation for major highway and airport construction in the late 1990’s. A new scale house and office was completed in 1997. In 2000 a new primary crushing station was completed in the Moncure pit. This state-of-the-art system greatly improved the quarry crushing capacity and efficiency. Beautification efforts continued, and the quarry was awarded the National Stone Association’s Showplace Award in 2001.

The Moncure superintendent, Robbie Bogan, joined the com­pany in 1995 as a jaw crusher operator. After two years of training he was promoted to plant foreman. Robbie was put to the test almost immediately as the plant had a record year with over one million tons sold in 1999. In 2005 he was promoted to superintendent. Robbie also managed to complete his college degree during his years of service. 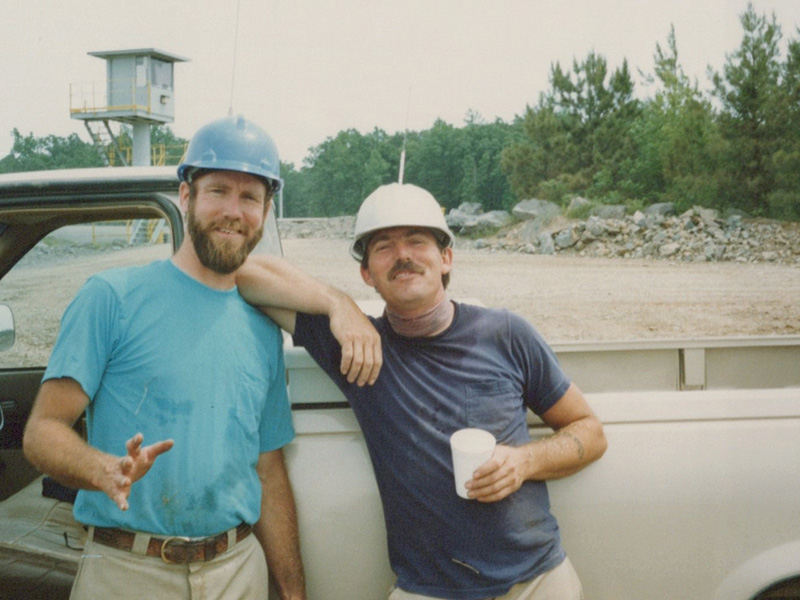 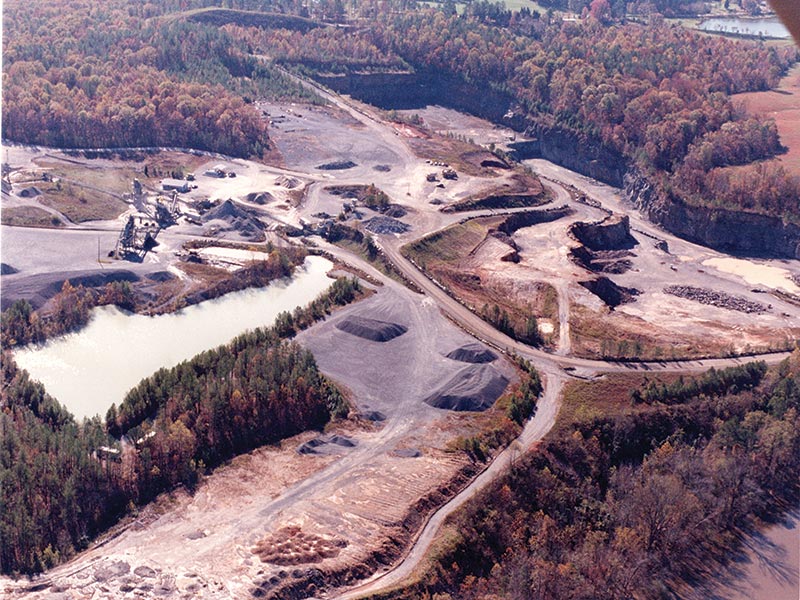 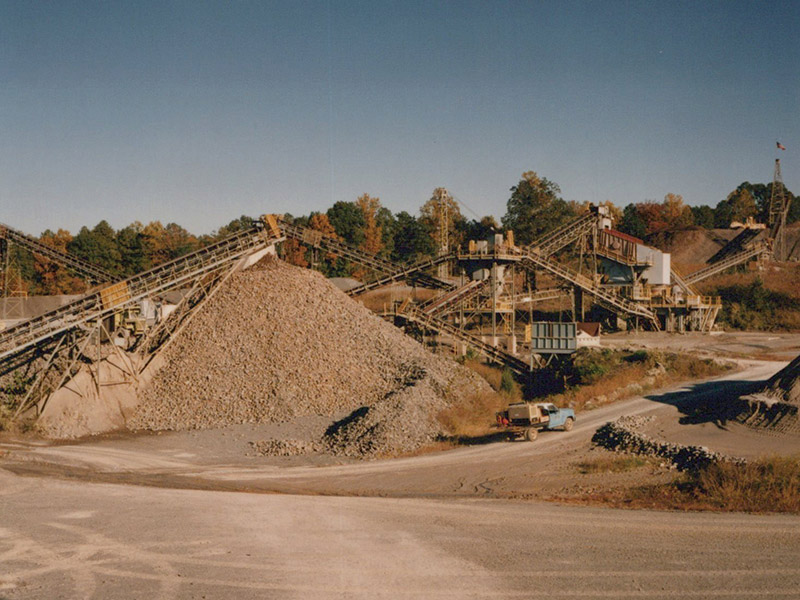 Moncure surge and plant after reopening 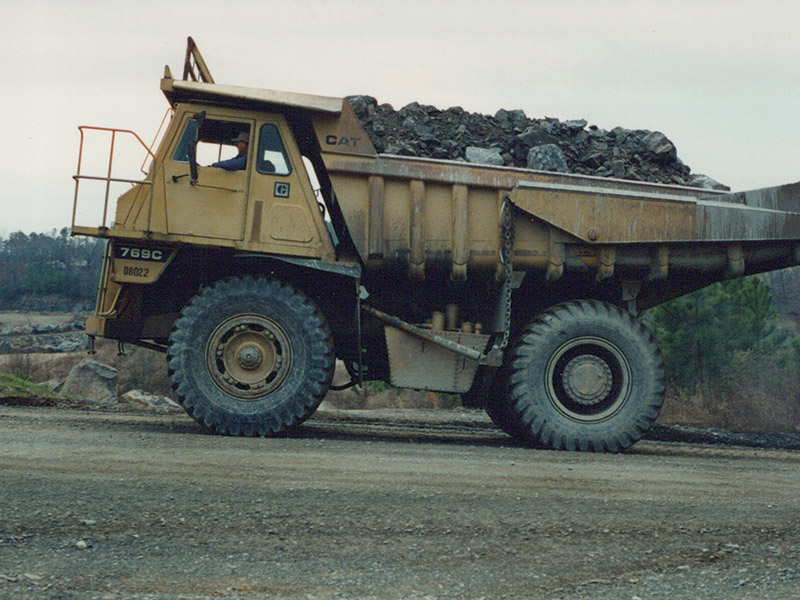 Sonny Mashburn hauling a load to the jaw 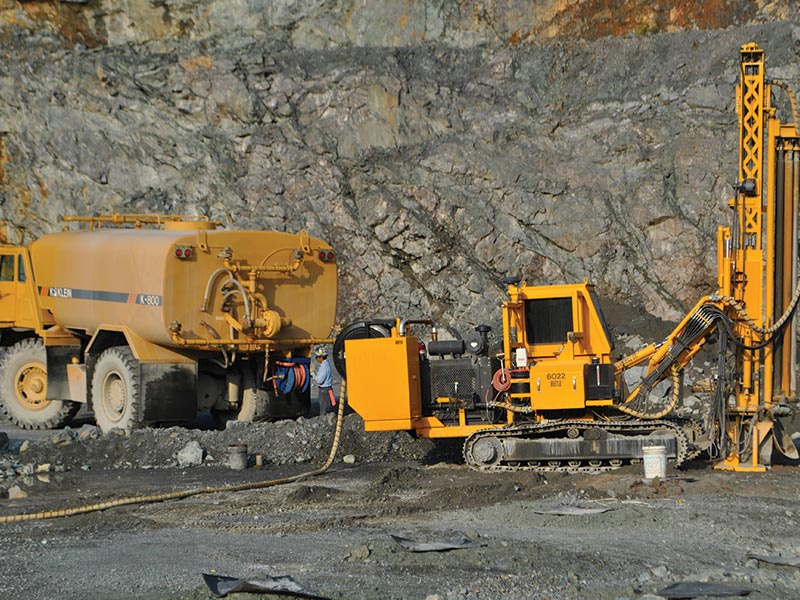 Refilling drill with water while drill is preparing for a shot 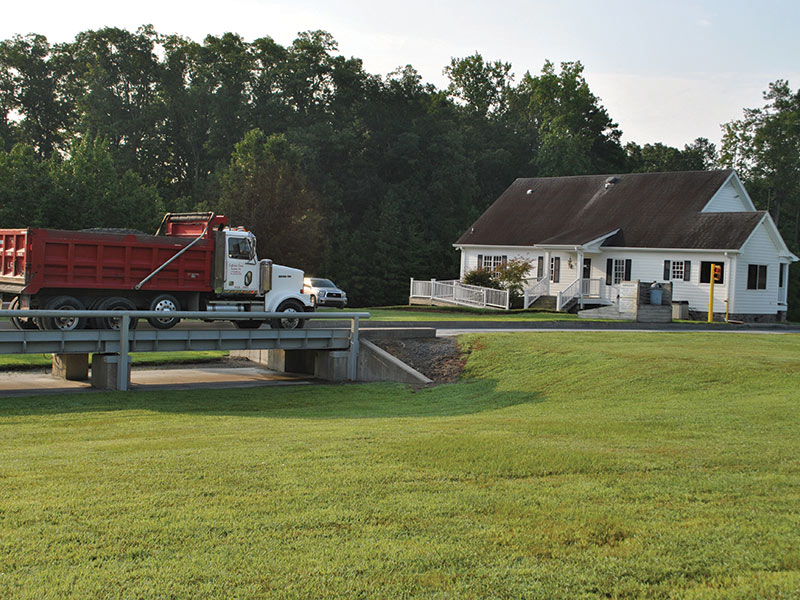 Charles Lutterloh rolling across the scales at Moncure Quarry 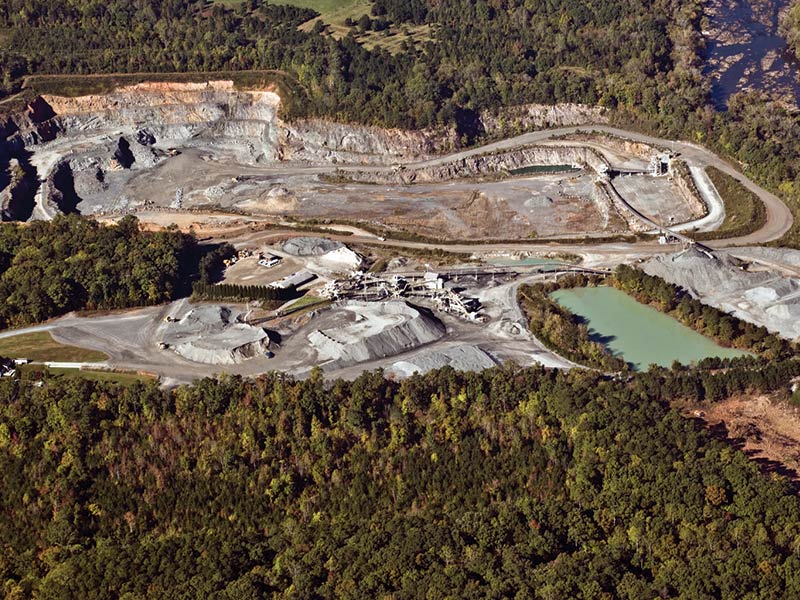 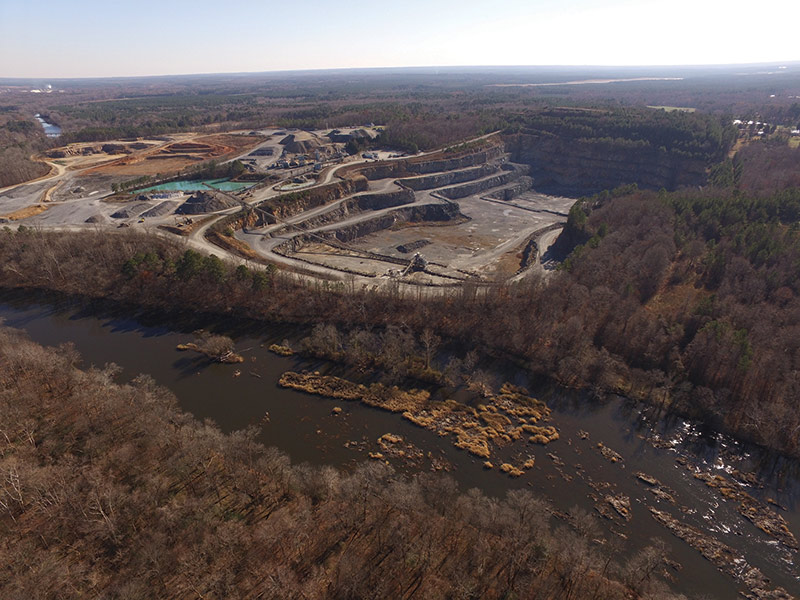 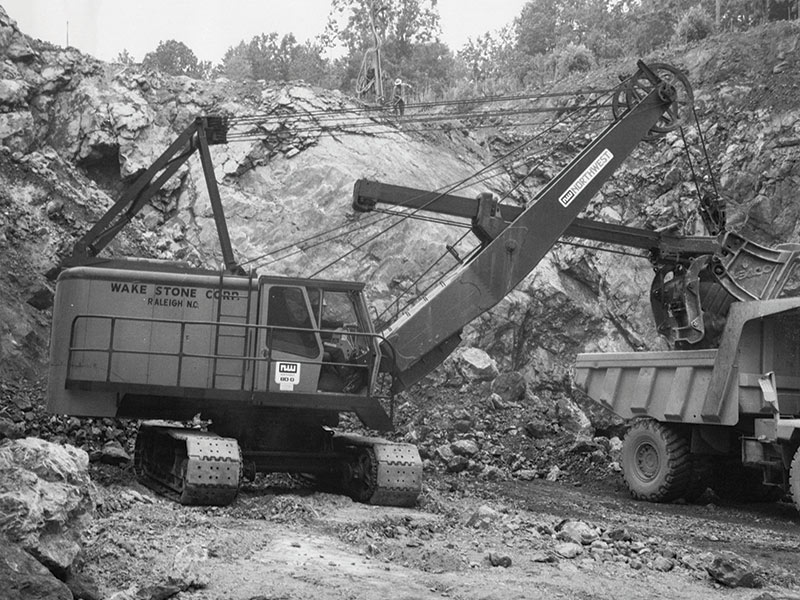